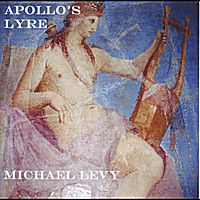 From the recording Apollo's Lyre

I am pleased to announce, that the Canadian Grammy Award winning composer, Rufus Wainwright, has arranged my "Hymn to Zeus", in two scenes of his ancient Roman-themed second opera, "Hadrian" - produced by the Canadian Opera Company which premiered in Toronto on 13th October!

My official credits, tprinted in the score and in the program on the main crediting page along with all cast and creative, for the performances of "Hadrian" at the Canadian Opera Company and in programs at all subsequent productions, in perpetuity, are:

"Ancient Lyre music adapted from a theme, Hymn to Zeus, by Michael Levy. Used by permission"

Back in May 2017, after being emailed out of the blue, via my website contact form from Rufus's management team, I ended up having an almost surreal telephone conference, in my humble little hallway - with Rufus Wainwright himself (whilst he was actually on tour in Bergen, Norway!) and his dramaturg, Cori Ellison, in California!!

In short, Rufus arranged my "Hymn to Zeus" for harp (played near the soundboard, 'Pres de la Table' style, to imitate the sound of my lyre), in the Act IV, Scene II; when Hadrian first meets his lover Antinous and later, in Act III Scene VIII; when he first learns the truth about Antinous's death...murdered at the hands of Hadrian's general, Turbo.

"Hymn to Zeus" originally featured in my 2010 ancient Greek-themed album, "Apollo's Lyre". The piece is in the intensely introspective ancient Greek Dorian Mode (equivalent intervals of E-E on the white notes of the piano and misnamed the 'Phrygian' Mode in the Middle Ages). This was the only musical mode which Plato felt had true moral worth; the most 'manly' of the modes, capable even of inspiring bravery in battle! Here is the philosophical dialogue on the moral values of the Dorian Mode, in the pages of Plato's "Republic":

"We were saying, when we spoke of the subject-matter, that we had no need of lamentations and strains of sorrow?

And which are the harmonies expressive of sorrow? You are musical, and can tell me.

The harmonies which you mean are the mixed or tenor Lydian, and the full-toned or bass Lydian, and such like.

These then, I said, must be banished; even to women who have a character to maintain they are of no use, and much less to men. Certainly.

In the next place, drunkenness and softness and indolence are utterly unbecoming the character of our guardians.

And which are the soft or drinking harmonies?

The Ionian, he replied, and the Lydian; they are termed 'relaxed.'

Well, and are these of any military use?

Quite the reverse, he replied; and if so the Dorian and the Phrygian are the only ones which you have left.

I answered: Of the harmonies I know nothing, but I want to have one warlike, to sound the note or accent which a brave man utters in the hour of danger and stern resolve, or when his cause is failing, and he is going to wounds or death or is overtaken by some other evil, and at every such crisis meets the blows of fortune with firm step and a determination to endure; and another to be used by him in times of peace and freedom of action, when there is no pressure of necessity, and he is seeking to persuade God by prayer, or man by instruction and admonition, or on the other hand, when he is expressing his willingness to yield to persuasion or entreaty or admonition, and which represents him when by prudent conduct he has attained his end, not carried away by his success, but acting moderately and wisely under the circumstances, and acquiescing in the event. These two harmonies I ask you to leave; the strain of necessity and the strain of freedom, the strain of the unfortunate and the strain of the fortunate, the strain of courage, and the strain of temperance; these, I say, leave.

And these, he replied, are the Dorian and Phrygian harmonies of which I was just now speaking."