1. I have arranged a 10 page PDF booklet of arrangements for 10-string lyre, featuring 2 examples of the actual surviving music of ancient Greece & 8 arrangements of my own compositions in a selection of some of the original ancient Greek Modes - this booklet is freely downloadable here.

I also offer a very limited number of one-to-one lyre lessons via Skype or Facebook Video Chat - for further details on availability, please contact me directly! 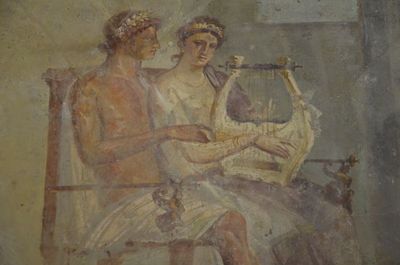 2. There is a new series of beginners tuition books available from Marini Made Harps for their wonderful 10-string "Davidic Harp" (their beautifully hand-crafted 10-string lyre which I have had the pleasure of playing since 2011).

The Marini's are devout Christians and although the "faith-biased" melodies in these books may not appeal to everyone, these publications are still a really invaluable resource for anyone wishing to learn the basics of lyre playing with either a different faith or none at all, because as far as I know, these are the only tuition books for beginners lyre which exists in the world! These publications can be purchased here

3. Here is a fantastic online resource for learning to play the lyre! By entering any specific tuning for a lyre of any specific number of strings, the following program (in the 'chords' section), enables one to 'block and strum' almost any imaginable chord on the lyre, by the ancient lyre playing technique of blocking specific strings with the left hand, whilst strumming with the plectrum, only those strings required to sound:

Below are purchase links on Amazon, to titles of some invaluable books relating to music in the ancient world:

Suzanne Haik-Vantoura: "The Music of the Bible Revealed: The Deciphering of a Millenary Notation" (BIBAL Press & King David's Harp, Inc, 1991)

Richard J. Dumbrill, "The Archeomusicology of The Ancient Near East" (Trafford Publishing, 2005)

Egypt and the Semites Part II: The Second Intermediate Period

Jews and Music - The Legacy of Jubal

An International Study Group on all matters of Archaeomusicology, Paleo-Organology & Music Prehistory.

Group for musicologists, performers, and other historians interested in working on music from the Ancient world up to the Carolingian Renaissance, as well as any music employing principles of Ancient Music and Ancient Music Theory, and who want to share ideas and keep in touch with others with similar interests.

A fascinating Facebook Group, started by Lyre Luthier, Michael J King, this is an open forum for the discussion of anything & everything to do with lyres & lyre making.

A blog about everything ancient Greek...

Michalis Georgiou of Cyprus has been steeped in that island’s ancient, always visible history, and over twenty years ago stepped in the world of instrument reconstruction.  Already a lifelong musician, Georgiou took to his workshop and recreated a large number of ancient Greek instruments; most interestingly for this paper, he has built over 23 different types of stringed instruments, many of which can be classified as lyres.  He formed a large award-winning student-based orchestra to perform reconstructions of ancient music on these instruments, leading to:

Luthieros are specialist luthiers based in Thessaloniki, Greece, who have a wonderful range of hand-made chelys-style ancient Greek lyres.

Luthiers specializing in creating stunning replica musical instruments from throughout the ancient world.
Marini Made Harps

Hand-made Davidic Harp makers of outstanding quality! I personally recommend the Marini Made Davidic Harp, for anyone with a passion for either spiritual or ancient music.

Mid East Ethnic Instruments manufactures an incredibly affordable range of Biblical lyres, including the Kinnor & Nevel - ideal for the beginner!

Corwen Broch is a unique luthier, specializing in recreating the North European lyres of the Dark Ages...

Michael specialises in recreating replica Northern European Lyres of the Dark Ages, based upon the unique remains of the Anglo Saxon lyre discovered at Sutton Hoo...

Jrv Luthier is a Spanish based craftsman, specializing in the construction of beautiful quality lyres, harps, lutes, psalteries and other string instruments...

Thomas Handwerker is a luthier, specialising in making beautifully ornate replica Trossingen Lyres - the Germanic Lyre of the Dark Ages.

The amazingly archaic Ugandan Adungu arched harp can be ordered from this site - the Adungu is virtually identical to the arched harps once played in ancient Egypt, since the Old Kingdom, some 4500 years ago...

The Adungu features in my EP album, "The Ancient Egyptian Harp"

Learn to Play the Adungu!: Bow Harp from Northern Uganda

A unique instructional book by Martin Klabunde, on how to play the traditional style Adungu (the instrument features in my album "The Ancient Egyptian Harp") - the incredibly archaic 9 string arched harp with a skin soundboard, is virtually identical to the ancient Egyptian Shoulder Harp of the New Kingdom, last played some 3500 years ago...

Marino Gutierrez is a maker of Biblical Lyres, based in Spain...

The Harrari's are makers of Biblical lyres & harps, based in Jerusalem...

Makers of Biblical Lyres, based in the USA...

Jubilee Harps are makers of Biblical lyres, based in the USA...

PURCHASE LINKS TO MY ALBUMS

iTunes - All of my albums are available from iTunes Stores around the world, as well as streaming on Apple Music.


Amazon - All my albums are available from Amazon MP3 Store!  Physical CD's of my debut album "King David's Lyre; Echoes of Ancient Israel" are also available to order anywhere in the world from Amazon Music Stores.

Bandcamp - Unlike other major music digital stores, such as iTunes, Amazon MP3 Store & CD Baby, Bandcamp gives the unique option of being able            to instantly download either CD quality, lossless audio files (WAVs, FLACs, AIFFs etc) or amazing broadcast quality 320kbps MP3s, of any of my                    albums! Bonus features included with each download, are a HD video of my BBC 4 performance and a free PDF booklet of detailed album notes.

OTHER WEB PAGES RELATING TO MY MUSIC


My YouTube Channel - Countless videos of my many "Musical Adventures in Time Travel" performed on my lyres...
The Klezmer Fiddle - Following the release of my 2 albums of Klezmer Fiddle Music, "Echoes of the Shtetl" & "The Klezmer Fiddle" , I created this separate website to  promote the albums, with an abundance of fascinating historical details about the origin of Klezmer music, and a unique selection  of precious, rare  photographs of the tragically lost Shtetls of Eastern Europe, where Klezmer music once blossomed for centuries, prior to the virtual total destruction  of Jewish culture in Eastern Europe during the Holocaust.
Michael Levy - Composer For Lyre Facebook Page - Visit my Facebook page for all updates on my new albums, new YouTube videos and all the latest news and album reviews.
Myspace - now an actual 'digital relic', this is where all the research & historical background to my albums first began!

COLLABORATION WITH OTHER ARTISTS & AUTHORS

In May 2012, I had the pleasure of collabrating in the recording of an epic Roman-themed album, "SPQR", composed by Michael & Maryanne Tedstone, for the Felt Music Sound Library (for use in television & film)

Michael & Marynne brought together a group of ancient music specialist musicans, including myself, called "The Orpheus Project".  This album, recorded & mixed at the legendary George Martin Air Edel Studios in London, features my lyre...
Rebecca Penkett

In 2012, I had the pleasure of jamming with the talented folk harpist, Rebecca Penkett. I was so pleased with one of our spontaneous sessions, that it  now features as track 17, "Realm of the Ancestors", in my album "Musical Adventures in Time Travel".

In 2009, Clint Goss released the album "Jam Tracks in F# Minor" - a selection of music from several different artists, which can be accompanied by Native American Flute. This CD features Clint's miraculous remastering of the original audio from my "virtually viral" Youtube video of my first "live" performance of Dr Richard Dumbrill's interpretation of the 3400 Hurrian Hymn Text H6, from ancient Ugarit - the modern musical notation of which, I first stumbled across back in 2008, on Clint Goss' own website!  My remastered, original "live" Youtube performance of the Hurrian Hymn can be heard on track 21 of this album...
TM Camp

Tracks from my albums "The Ancient Greek Lyre" & "Apollo's Lyre" featured in this iTunes podcast of the intriguing new book by TM Camp, "The Cradle".

I am always willing to consider link exchanges between my website & other potentially relevant websites. Please contact me directly for consideration of a link exchange...

Panagiotis Tsandaris directed, filmed and edited the video shoots in ancient Europos of my performances on a wide range of the beautiful replica ancient Greek lyres made by Luthieros:

National Centre for Early Music
The National Centre for Early Music is a directory of professional early music ensembles and performers based in the UK. It is designed to raise the profile of early music by making artists’ details more accessible to promoters and the public.
http://www.prestiniusa.com
We at http://www.prestiniusa.com provide good quality musical instruments link bassoon cane, bassoon reeds, oboe cane and oboe reeds. We also repair musical instruments such as woodwind and trumpet etc.


Prashant Chopra
A construction guy whose passion is movies and thus interested in giving movie reviews...

Ratio To Sense
A blog on harmonic and acoustic theory  by John Stephens, Sitarist...
Psalms Online
The purpose of this website is to share the timeless, miraculous positive experience of reciting psalms-tehillim