I. THE OLDEST WRITTEN MUSICAL NOTATION SO FAR DISCOVERED IN HISTORY

The oldest surviving musical notation so far discovered, dates from c.1950 BC - this was a set of musical instructions to play the hymn, "Lipit-Ishtar" (King of Justice), found inscribed in Cuneiform on a clay tablet discovered at Sumer. Basically, this is no more than a quote of specific tuning intervals for lyre, followed by a tuning scale of the musical mode to be used in the Hymn.

Here is a rendition of the musical instructions for Lipit Ishtar, as arranged for solo lyre, by "Ensemble De Organographia" in their album from 2000, "Music of the Ancient Sumerians, Egyptians & Greeks":

A PDF booklet of the detailed album notes for this fascinating album featuring this piece, can be downloaded here

The oldest surviving written melody so far discovered in History which can actually be reconstructed, was Hurrian Hymn Text H6. The musical notation for this amazing 3400 year old melody, was discovered in Ugarit, Northern Canaan (now forming the Southern part of modern Syria) in the early 1950s, and was preserved for 3400 years on a clay tablet, written in the Cuneiform text of the ancient Hurrian language:


"Thought to be 3,400 years old, this relic has been in Damascus since 1955, following its discovery by a group of French archeologists in the coastal town of Ugarit...The artefact records the Hurrian Hymn, a song directed to the goddess Nikkal [wife of the moon god]. Ugaritans worshipped a number of deities, each one specific to the various parts of their lives. Nikkal, meaning "Great Lady and Fruitful", was the goddess of the orchards....For now, at least, the exact lyrical content of the Hurrian Hymn remains partly concealed, although a translation undertaken by Hans-Jochen Thiel in 1977 is considered closest to the original's spirit" (Article in "The National")


In short, the tablet had the text of a song, which was an invocation to the Ugaritic goddess Nikkal, goddess of the orchards and wife of the moon god, Yarikh, to bestow her fertility upon barren women - here is a partial translation of the song, from the surviving portion of the original Hurrian text:

(Once I have) endeared (the deity), she will love me in her heart,
the offer I bring may wholly cover my sin,
bringing sesame oil may work on my behalf in awe may I ...
The sterile may they make fertile.
Grain may they bring forth.
She, the wife, will bear (children) to the father.
May she who has not yet borne children bear them."

A photograph of the actual clay tablet on which the Hurrian Hymn was inscribed, can be seen below:

In short, the lower part of the text which Dumbrill transcribed (the Hurrian musical notation below the words of the song), was in a corruption of Akkadian Babylonian, in which the specific names of 9 lyre strings represented the specific changes in pitch - which according to Dr Richard Dumbrill, clearly showed the outline of a 3400 year old Bronze Age melody, which features descending 5ths and ascending 3rds. gave the names of 9 specific lyre strings, and the specific musical intervals between these strings. In other words, the notation of the Hymn was a sort of "guitar tab" - for lyre!

There are several such interpretations of this melody by other musicologists , but to me, the fabulous interpretation of Dr. Dumbrill just intuitively somehow sounds the most 'authentic'.

Although 29 musical texts were discovered at Ugarit, only this text, (text H6), was in a sufficient state of preservation to allow for modern academic musical reconstruction, as Richard Dumbrill recently explained to me via direct email correspondence:

"Altogether, in the Library of the Royal Palace of Ugarit, 29 music tablets were found, all in pieces. Only one could be reconstructed, H6. This is the one I have used for my interpretation."

Below is a fascinating video by Richard Dumbrill, explaining how this 3400 year old melody was finally deciphered by him:

[Ancient music defies the classification and custom labels of music today. While most modern music is easily labeled and classified into specific genres, such as pop, rock, and classical, it is believed that ancient music was used to create a sense of awe during religious ceremonies. There are some record labels that produce gospel and Christian music, but the majority of record labels produce music for entertainment and marketing purposes.]

Richard Dumbrill has recently recorded a purely vocal rendition of his interpretation of the Hurrian Hymn, in the original elusive Hurrian language. Here is what he kindly explained to me, when I asked about how his interpretation of the melody differs from similar attempts made at interpreting the melody of Hurrian Hymn Text H6, made by the musicologists, Martin R West, Kilmer & Krispijn:

"The differences in interpretations of this text mainly come from the

insistence of Western scholars to interpret Semitic (Jewish and non Jewish)
music as if it responded to Western music theory which is essentially
Christian material. Semitic, (Arabian Jewish, Christian and Islamic) music
uses filled intervals called 'ajnas' or ''uqud' which are sets used in
sequential order. West, Kilmer, Krispijn etc. know nothing about Semitic
musicology and therefore understand intervals as being empty and played
together a dyads, or as chords of 2 notes. The same scholars are also
limited by the octave which is the boundary of Western music while Semitic
music is not restricted by the octavial notion. This is why my
interpretation is melodic while others are not.

In respect of the Hurrian language, it is with great caution that we should

apprehend it. Too little is known about it. Was it melismatic or not in the
context of Ugarit, we do not know. Initially my voicing of the Hurrian text
equated to the number of beats in the piece. But that does not mean much.
Recently I recorded my latest version, in Byblos, Lebanon and in Damascus
with the advice of local musicians who felt that it should be 'maqamised' as
I have produced it in this version".

Whereas most other academic interpretations of the melody sound too 'Western', Dumbrill, in his musicological studies of Semitic (both Arabic and Jewish ancient Middle Eastern music), realized that the actual musical outline of the melody could be 'Maqamised' in the ancient traditional Middle Eastern style

Below is Dr Dumbrill's new purely vocal arrangement of the Hurrian Hymn. The effect of the new 'maqamised' version of the melody is to me, incredibly evocative:

A REPLICA BRONZE AGE LYRE ON WHICH TO ARRANGE THE BRONZE AGE HURRIAN HYMN?


Regarding whether the Hurrian Hymns were originally meant to be accompanied or sang solo, as in Dumbrill's arrangement above, we will probably never know for sure, but since the lyre was quite literally, 'the guitar of the Bronze Age' in being the most commonly used instrument that was used to accompany the human voice in these distant times, a typical asymmetrical Canaanite form of lyre would be the most likely type of lyre that may have once accompanied the Hurrian Hymns.

The most well known ancient illustration of just such a typical asymmetrical Canaanite lyre can be seen in the Megiddo ivory carving, dating to around 1,300 BCE:

Circumstantial evidence for the performance of a similar Canaanite style of lyre to accompany the Hurrian Hymns, can actually be found at Ugarit itself - here is a carving of a female musician from Ugarit, playing this very same type of lyre:

In attempting to recreate just such a typical asymmetrical Canaanite form lyre on which to attempt to arrange the Hurrian Hymn, I recently discovered that remarkably, an almost perfectly preserved ancient Egyptian lyre has survived the ravages of the last 3,500 years and is currently preserved in Leiden: 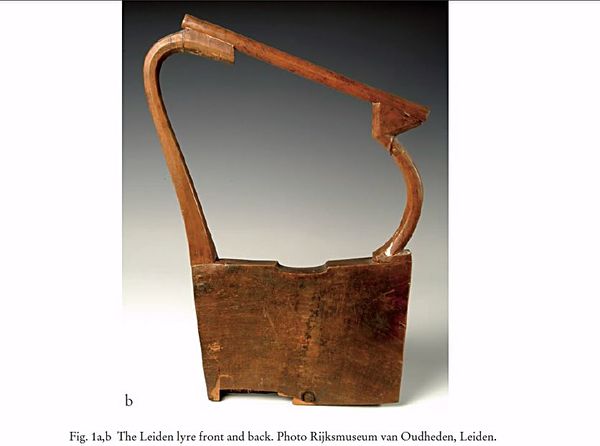 These type of distinctively Canaanite asymmetrical lyres were almost certainly introduced into Egypt during the reign of the Canaanite Hyksos kings.

Intrigued at the possibility of recreating just such a lyre, I arranged to have the 'Leiden Lyre' recreated for me, by Luthieros: 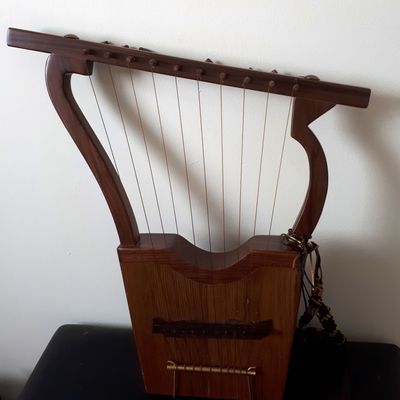 This custom-made lyre, also features an experimental and probably more authentic bridge, with a wider 'bench-shaped' top - in almost all the ancient illustrations of lyre bridges, this form of bridge seems to be the most common. Unlike the sharp-topped modern guitar-style 'A' shaped bridge, which creates a pure tone, these wider-topped bridges create a wonderfully exotic, subtle buzzing timbre, rather like an Indian sitar or a bray harp.

The 'Leiden Lyre' upon which my replica is based, actually dates to between circa 1,500 - 1,300 BCE; more or less precisely the time of the Hurrian Hymns; which in conjunction with the exotic Middle Eastern mode used in this arrangement in my attempt to 'Maqamize' the melodic line interpreted by Dumbrill and the distinctive buzzing timbre of this lyre, for me, brings both the 3400 year old text of the song and the melody, more truly 'back to life'...

The oldest complete surviving melody in History, is the ancient Greek song, commonly known as the Epitaph of Seikilos:

This piece is unique in musical history, as it is the only piece of music from antiquity in the entire Western world, that has so far been found, which has survived in its complete form, and unlike much earlier surviving fragments of melodies that have been found, this song is written in a totally unambiguous alphabetical musical notation, which can be played, note for note, as it was written - about 2000 years ago! The composer is named as Seikilos, son of Euterpe.

About 2000 years after it was written, this melody was rediscovered in 1883, in its complete & original form. It was found inscribed in marble on an ancient Greek burial stele, bearing the following epitaph:

"I am a portrait in stone. I was put here by Seikilos, where I remain forever, the symbol of timeless remembrance". 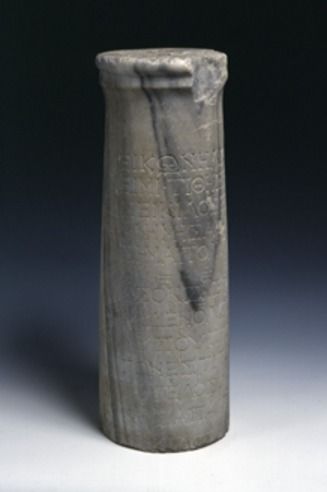 The words of the song are:

Meden holos su lupou;
Pros oligon esti to zen
To telos ho chronos apaitei"
(While you live, shine
Don't suffer anything at all;
Life exists only a short while
And time demands its toll)

In modern musical notation, the melody looks something like this:

In 2013, one of my earlier Youtube arrangements for solo lyre of the Epitaph of Seikilos featured in an interesting article in "The Australian Daily Telegraph" - the article can be viewed here

My latest studio recording of the Epitaph of Seikilos, recorded on my new hand-made lyre, in the wonderfully pure just intonation of antiquity, can be found on track 7 of my 2012 album, "A Well Tuned Lyre: The Just Intonation of Antiquity" 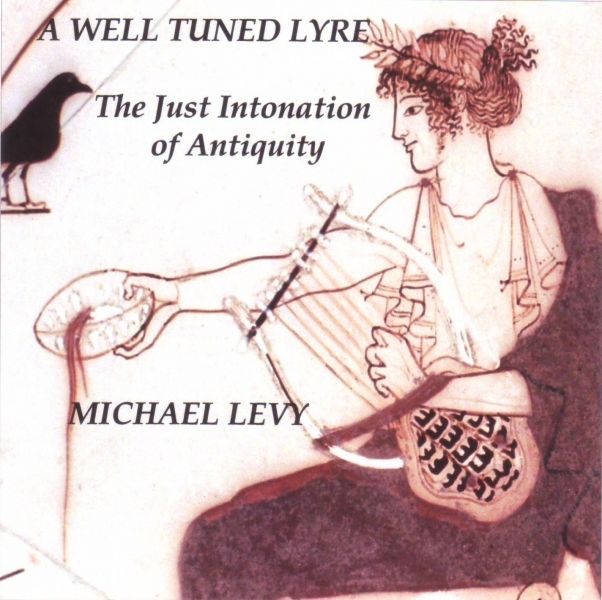 In 2017, I had the pleasure of collaborating with the talented Californian vocalist, multi-instrumentalist, Bettina Joy De Guzman - using the recording of my arrangement of the Epitaph of Seikilos from my album, "A Well Tuned Lyre; The Just Intonation of Antiquity", Bettina skillfully added both a haunting vocal line and replica Luthieros ancient Greek phorminx to the original arrangement and released the new arrangement as a single: 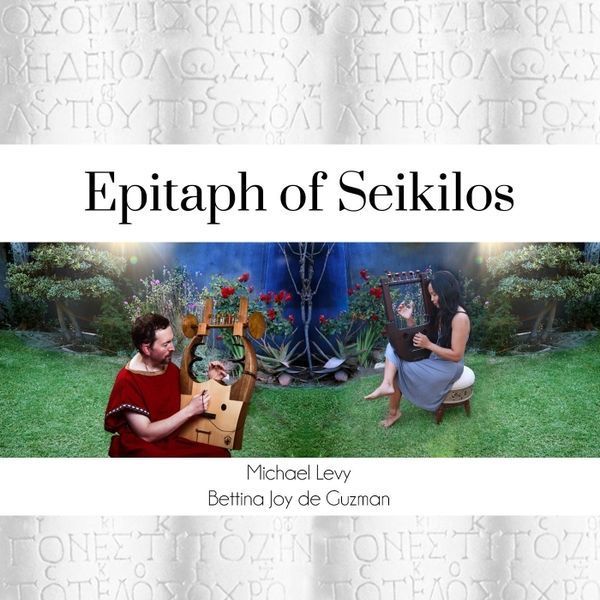 The new arrangement, transformed by Bettina's beautiful vocals, can be heard below: