The ancient Egyptian arched harp has a history dating back over 5000 years! The first bowed harps of the Old Kingdom, (c.2686 BC – 2181 BC), which basically resembled large archery bows strung with about 4 - 5 strings, were developments of the basic African Mesolithic Musical Bow - the ultimate ancestor of both the harp & lyre... 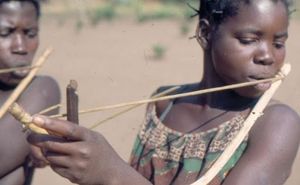 As time progressed, more strings were gradually added to about 22 - the classic full-sized ancient Egyptian arched harp generally featured a taut leather soundboard, stretched over a resonator, usually of woods such as Cedar. Beneath the leather skin, the string passed directly into the resonator, attached to a horizontal wooden pole. The tension of the strings on the wooden pole beneath the skin kept the skin soundboard taut - a very simple, elegant design.

The most amazing reconstruction of a full-sized replica ancient Egyptian harp I have so far foun, is that played by Peter Pringle. Here is his magnificent performance of a 3000 year old ancient Egyptian love song...

As well as the full-sized arched harp, in the New Kingdom of ancient Egypt (1550 – 1070 BCE), the smaller, more portable ancient Egyptian shoulder harp seems to have become briefly more popular, from about the reign of Tuthmosis III (1479 BCE to 1425 BCE). Please click on the download link here, for a fascinating PDF of an article on this subject, "Reconstruction of a Shoulder Harp in the British Museum" by Bo Lawergren, as published in "The Journal of Egyptian Archaeology", Vol. 66 (1980), pp. 165-168.

Several of these unique specimens have miraculously survived - below is a fine example of such a surviving ancient Egyptian shoulder harp, preserved in the Metropolitan Museum of Art in New York, which dates from 1390–1295 BCE: 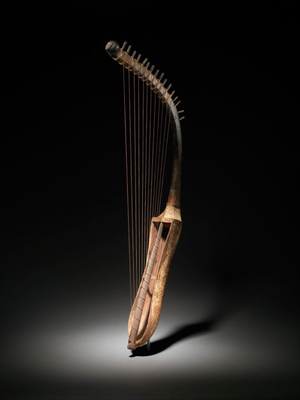 Here are some detailed explanatory notes about this exhibit above, quoted from the Metropolitan Museum of Art’s website:

“Egyptian arched harps from Dynasty 4 onward coexisted with a great variety of harps in different shapes and sizes. Two harp types were most common—the arched harp with a curved neck, like this one, and the angled harp with a neck sharply perpendicular to the body. Unlike most European versions, ancient Egyptian harps have no fore pillars to strengthen and support the neck. Older forms of arched harps had four or five strings, this harp has twelve strings. Skin once covered the open, slightly waisted sound box. Rope tuning rings under each string gave a buzzing sound to the soft-sounding tone produced. Topping the arched frame of the harp is a carved human head.


This type of portable, boat-shaped arched harp was a favourite during the New Kingdom and is shown in the hands of processional female musicians performing alone or in ensembles with singers, wind instruments, sistrums, and rattles. Prior to the Middle Kingdom, depictions of harpists feature men as the chief musicians. Harps and other instruments were used for praise singing and entertainment at ritual, court, and military events. Today, arched harps derived from these ancient Egyptian forms are still used in parts of Africa and Asia” http://www.metmuseum.org/toah/works-of-art/43.2.1


Incredibly, an almost exact descendant of the ancient Egyptian arched harp is still played on the African continent today, in the form of the 9-string Adungu harp of Uganda.

As can be seen in the photographs below, the 9-string Adungu (also known as the Ennanga) is virtually identical to the ancient Egyptian shoulder harp preserved in the Metropolitan Museum of Art:

Like the Adungu arched harp, the ancient Egyptian arched harps also had a soundboard of taut leather. Just as on the Adungu, the strings are attached to the body of the harp on a wooden pole beneath the leather soundboard – the tension of the strings pulling on this wooden bar keeps the skin soundboard above it taut.

Many examples of the Adungu harp also have similar rings behind the strings to produce a buzz (although the Adungu harp I was lucky enough to find in order to create this album does not). My arched harp has 9 strings, made of some sort of natural fibre (possibly silk), which produces a very gently tone, quite different to the brighter, more resonant tone of modern high tension nylon harp strings.

Below are my series of videos featuring this incredibly archaic African harp...

Below is a video featuring my first rough recording of track 1, "Ancient Harps of Kemet" (an improvisation on an ancient Egyptian minor pentatonic scale, deciphered from ancient Egyptian musical chironomy gestures by the late Professor Hans Hickmann of the Museum in Cairo):

Below is another video of this incredible harp being played in Uganda. Note that in the Ugandan musical tradition of the Alur people, instead of the bass string being farthest away from the player & the sound-hole of the harp facing the audience (as in all ancient illustrations of ancient Egyptian harpists), the Ugandan Adungu harp is held the other way around, with the sound-hole facing the player. How this change in playing position originated is a fascinating mystery...

Further details can be found at:

The Bolan Bato also seems be be derived from the archaic ancient Egyptian arched harp:

THE SEPREWA HARP FROM GHANA

Another incredible arched harp, this time from Ghana, which also seems to be based upon the ancient Egyptian arched harp:

A technique known as "string stopping" (producing accidentals on a diatonically srung lyre or harp by shortening the vibrating length of a specific string by using a nail or knuckle of the hand as a fret on the string), was first hypothesised by the musicologist Curt Sachs in 1924, in an attempt to explain how it was possible to play some of the complex, surviving examples we have of ancient Greek music, on a lyre which usually has just 7 strings.

For me, the most compelling evidence for Curt Sach's hypothesis on the use of string-stopping on the ancient Greek lyre to produce chromaticism, is the visually compelling evidence of the same technique in use, at least one and a half thousand years earlier than the age of Classical Greece, as practiced by the harpists of ancient Egypt...

There is a fascinating PDF article about the ancient Egyptian harp from a book excerpt "Ancient Egyptian Musical Instruments" by Moustafa Gadalla, which I recently discovered, featuring an illustration of a relief from tomb 11 in the Ta-Apet (Thebes) area (New Kingdom 1520 BCE) which actually seems to illustrate this unique ancient harp-playing technique : a harper shortens the string with one hand,and plucks with the other - this is surely the first unambiguous pictorial evidence of the technique of string-stopping from the ancient world! The bent string is clearly shown: 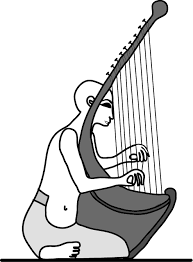 Also, the book excerpt mentions that "in Idut’s Tomb [c. 2320 BCE], two of the five depicted harpers pluck with only the right hand, while the left one holds down the string"

In my EP album, "The Ancient Egyptian Harp", I experiment with the ancient Egyptian harp-playing technique described in this article - of using the left hand to shorten the vibrating length of the string, to create microtones or semitones, in the tracks "Ancient Harps of Kemet" & "Hymn to Osiris"

If string-stopping was an established ancient Egyptian harp-playing technique for playing chromatics, in use from at least as early as 2320 BCE, then surely there can be no problem with Curt Sach's hypothesis that it was also being used 1500 years later, by the lyra & kithara players of Classical Greece?

For me, this illustration from ancient Egypt, is the "smoking gun" to prove the existence of Curt Sach's hypothesis of the finger-stopping technique to play accidentals on a diatonically strung lyre or harp - & even more significantly, the existence of this finger-stopping technique is evidence of an understanding of chromaticism by the musicians & composers of antiquity, dating back over 4000 years!

The music of the ancients was far more intricate, complex, chromatic & harmonic, than any of the exponents of the "Urban Myth of the Monotony of Monophony in the Ancient World" would ever have us falsely believe!

There are several fascinating examples of arched harps, which so closely resemble the ancient Egyptian arched harp, that this certainly points to possible evidence of the migration of this instrument from ancient Egypt to other parts of the ancient world, presumably along ancient trade routes...

MIGRATION OF THE ARCHED HARP INTO MESOPOTAMIA 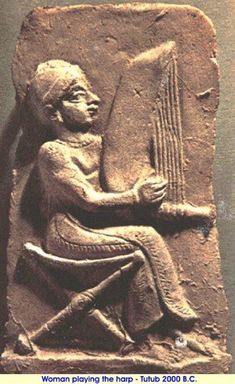 MIGRATION OF THE ARCHED HARP INTO ANCIENT GREECE

A similar angular arched harp was also played in ancient Greece, where it was known as the Epigonion:

There existed a form of ancient Greek arched harp, almost indentical to the portable shoulder harp of the New Kingdom of ancient Egypt & again, strikingly similar to the Ugandan Adungu, still played today!). This instrument was called the Sambyké (sometimes spelt "Sambuca"):

Below is an illustration of the sambyké being played - from an illustration found in an article by Martha Maas: "On the Shape of the Ancient Greek Lyre", The Galpin Society Journal, Vol. 27 (May, 1974): 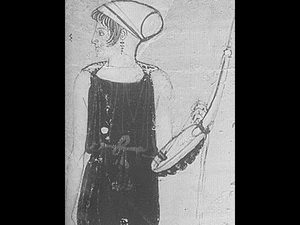 The similarity in both appearance & construction (a skin membrane over a resonator into which the strings enter directly, attached to a horizontal piece of wood beneath the skin soundboard) is astounding!

An ancient Greek naval siege engine was probably also named the Sambuca, due to its striking similarity in appearance to this ancient Greek arched harp: 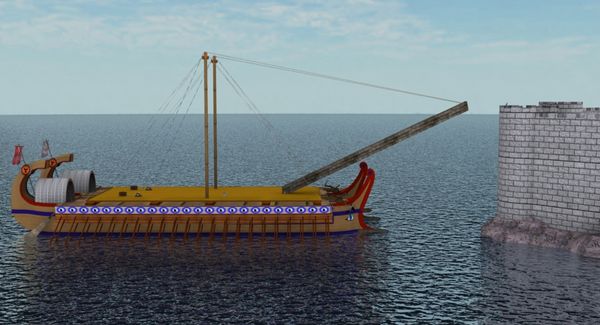 DID THE ANCIENT ARCHED HARP MIGRATE AS FAR AS CHINA?

There is tantalizing evidence, that this angular version of the ancient arched harp may have migrated in antiquity, as far as China! (Special thanks again, to my YouTube Channel subscriber "Leftyseargent", for providing the following intriguing details).

The "phoenix-headed konghou", known in China since at least the 3rd Century BCE, is an almost exact copy of the Mesopotamian processional harp seen earlier above, with the sound box carried against the shoulder and the post parallel to the ground: 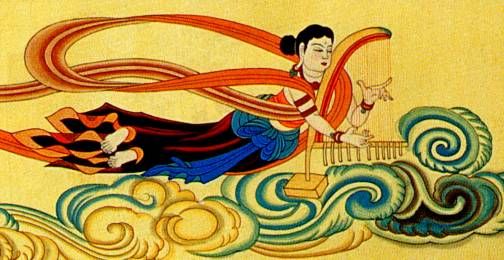 Further details can be found at:

Also, the "Shoo Kong Hou" is strikingly similar to the Mesopotamian Harp! During the Xi Han Dynasty (206 B.C. to 25 A.D.), it was brought along the Silk Road to Central China. It was shaped like a bow or triangle with 7, 15, 22, or 23 strings. The bottom of the sound box sat upon a short pole, and that pole was set on a square or round block. The musician plays the Kong Hou with two arms holding the instrument. The musician plucks the strings with thumbs and index fingers only. For further details, please visit:

The ever-increasing evidence of ancient cross-cultural exchanges of musical ideas in antiquity is absolutely fascinating!