How Did The Ancient Greeks Tune A 7-String Lyre? 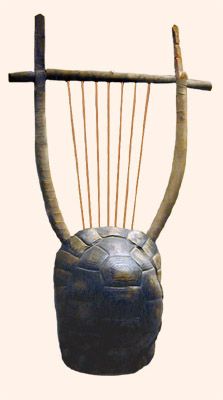 According to the research of the musicologist Curt Sachs in his book "The Rise of Music in the Ancient World - East and West" (page 230), the following tunings for the standard 7 string ancient Greek lyres can be inferred for the following surviving pieces of written music from ancient Greece (the tunings are all descending - in the tuning below, the first E is at the top string and the D is the bottom string):

Another possibility, taking into account E being sharpened to F and then adding that 7th string below:

All these would be "open-string" tunings as inferred by the preserved melodies Sachs discusses.

Here are some fascinating responses by the Oxford classicist and musicologist, Tosa Lynch, to questions I raised about the issue of the limited possibilities which only 7 strings must have presented to an ancient Greek or Roman lyre player:

1. Is there any specific documented tuning known for the standard 7 string lyre?

"Philolaus gives us the basic structure of all lyre harmoniai (two tetrachords disjoined by a tone, i.e. the so-called fixed notes – in the Dorian tonos c f g c’; in Lydian e-a-b-e’).

The tuning procedure detailed in Philolaus and other classical sources (the so-called tuning by consonances) shows that lyre tunings were based on the diatonic genus. This is consistent with Mesopotamian lyre tunings too, as Stefan Hagel and others have shown in detail.

By contrast, the enharmonic genus belonged to the aulos, where producing microtones was simply a matter of partially uncovering finger holes.

Olympus’ ‘pentatonic’ scale (by which I think you mean the spondeion/Libation song? and not the spondeiazon tropos?) belongs precisely to the realm of the aulos - he was the most famous mythical aulete of antiquity, and the text in question says explicitly that he was experimenting on this aulos when he discovered the beauty of that particular enharmonic arrangement.

Archytas’ aim was different – he was trying to find ways to describe mathematically/theoretically a variety of tunings employed by practicing musicians (including lyre players as well as aulos players).

The Aristides scales are offered in the enharmonic genus, because they come from an Aristoxenian source and they reflect the structure of modulating auloi.

By contrast, Ptolemy offers detailed descriptions of the so-called harmogai and explicitly says that they are tunings employed on lyres and/or kitharai (depending on the passage). And, once again, these tunings generally display various shades of the diatonic genus and one instance of a chromatic shade (the upper tetrachord of the tuning called tropoi).

This is consistent with all the rest of the evidence telling us that lyres/kitharai employed diatonic scales and occasionally ‘chromatic’ colouring of this basic diatonic canvas."

Of particular interest, is how the fascinatingly intense quartertone of the ancient Greek Enharmonic genus was natural to, and could have actually originated on the aulos.

2. I have found by my own experimentation that 9 strings seems to be the optimum number on my lyres (just enough range to play interesting solos yet not too many to hinder the African style 'string blocking' strumming technique - of which there is ample visual evidence of during classical antiquity) - with 7 strings, I can do virtually nothing!

"It seems to me that there are two overlapping questions here.

The fact that you feel that you can do ‘virtually nothing with 7 strings’ is probably right – in the sense that seven-stringed tunings were intended as basic tunings, that did not allow for modulations and were employed to accompany simple songs that had no extravagant modulations.

Similarly you would have changed between different sets of pipes at this stage, because before Pronomos’ time auloi were unmodulating too."

3. Were all 7 ancient diatonic Greek modes used on the lyres of classical antiquity?

"We don’t have any evidence that all the seven modes were employed on stringed instruments in Classical times (i.e. pre-New Music), which is when people would have employed more than the canonical 7-8 strings on one and the same instrument.

Stefan has posited 9 strings for the Classical kithara, and his arguments work on many levels; as Armand has mentioned, I’ve recently shown how Phrynis could produce five harmoniai on twelve strings with the aid of a tuning mechanism (the predecessor of tuning keys), and how Timotheus and Philoxenus further expanded this technique to reach the complete series of seven and eight harmoniai respectively on the same 12-string tuning "

4. What do we know about the actual lyre playing techniques used during classical antiquity?

"On the techniques employed to accompany sung music on kitharai, strumming/damping strings seems to have been the basic system (just as in our modern guitars). Plucking (psallein) was certainly an option too, but probably originated in harps.

The lyre could double the melody note-for-note, but this seems to have been especially true in educational settings (i.e. to help students learn a particular tune).

These points are nicely contrasted in a passage of Plato’s Laws :

“... a different and manifold playing of the lyre, in which the strings emit one melody and the composer who has put together the vocal melody another one, setting dense movements against wide distances, quick against slow tempo and high against low pitch both in concords and discords, and fitting in the same way all kinds of rhythmical intricacies to the sounds of the lyre ...” (Plato, Laws 812d–e).

You can find an excellent overview of these issues in West 1992 66–70, which could be a starting point for your research."

THE PROBLEM OF PERFORMING CHROMATICISM ON A DIATONICALLY STRUNG LYRE?

For me, however, one of the greatest mysteries, is how did the ancient Greeks managed to play some of the often complex & chromatic music of ancient Greece (as testified by the 60 or so fragments of ancient Greek music so far discovered) on a diatonically strung lyre with just 7 strings?

Besides the documented use of chromaticism in so many of the surviving fragments of notated music from ancient Greece, there is also the knotty issue, that so many of the extant ancient Greek melodies do not fit the range of 7 notes! For example, In the famous 'Skolion of Seikilos', the notated melody has a C; 4th degree of the mode starting on G - one hypothetical technique by which an ancient Greek lyre player could play this on a 7 string lyre, is to use the knuckle or nail of the left hand thumb as a fret on the string to raise its pitch by the required semitone - a technique also inferred by Sachs.

If this hypothetical 'string stopping' technique was not used, then one must conclude that the lyre simply 'filled in' some sort of either arpeggio-style or more rhythmic 'block and strum' style of accompaniments to the vocal line, rather than exactly mirroring it, similar to the block and strum still practiced today by African lyre performers...what a pity the ancient Greeks did not leave any MP3s of their music to rest the case either way!

So, below is a video of one of my live "archae-musicological experiments", in which I attempted to play an actual fragment of ancient Greek music (The First Delphic Hymn To Apollo, c.128 BCE) on just 7 strings, in an attempt to further verify the theory expounded by Curt Sachs that the ancient Greeks must have used some form of "finger stopping" (using either a knuckle or finger of the left hand as a fret on the lyre string) in order to play the accidentals clearly indicated in some of the extant surviving fragments of ancient Greek music:

There are, of course, arguments against the hypothesis of this technique of finger stopping to create accidentals on a lyre - there is no evidence of using it among cultures perceived to be ancient Greek music successors. For example, in Africa, where all manners of lyres have been played continuously since antiquity, this technique is never seen.

However, the fact remains, that the ancient Greeks clearly indicated the use of  chromaticism in so much of the surviving music that has been discovered - string-stopping on the lyre certainly provides one practical solution to this problem of how to actually produce these accidentals - and as can be seen in my experiment, the method proposed by Sachs works perfectly on the sort of low tension natural fibre or gut strings which would have been used on the Kitharas & Lyras once played in ancient Greece.

In more recent experiments, however, I have also found that the greater mass of a more authentic carved bone or wood plectrum can seamlessly also be used as a fret on any lyre string, raising its pitch by the required interval and thus considerably extending the range of a standard 7 string lyre of classical antiquity. This 'plectrum fretting' technique also more or less preserves the timbre of an open string when used, unlike the more muffled timbre a knuckle or nail gives.

Another interesting technique suggested by Greek musicologist and lyre virtuoso, Nikos Xanthoulis, is that extra range can be given to the basic 7 strings by means of producing different naturally occurring harmonics on the same string.

This is indeed a fascinating technique - but whether this or the other techniques proposed in this blog were ever actually used in antiquity, though, we almost certainly, regrettably, never know for sure!

EVIDENCE OF THE STRING-STOPPING TECHNIQUE IN ANCIENT EGYPT?

For me, the most compelling evidence for Curt Sach's hypothesis on the use of string-stopping on the ancient Greek lyre to produce chromaticism, is the even earlier evidence of the same technique in use, at least a thousand of years before the Golden Age of ancient Greece, as practiced by the harpists of ancient Egypt.

There is a fascinating PDF article abut the ancient Egyptian harp from a book excerpt "Ancient Egyptian Musical Instruments" by Moustafa Gadalla, which I recently discovered, featuring an illustration of a relief from tomb 11 in the Ta-Apet (Thebes) area (New Kingdom 1520 BCE): a harper shortens the string with one hand,and plucks with the other - this is surely the first unambiguous pictorial evidence of the technique of string-stopping from the ancient world! The bent string is clearly shown: 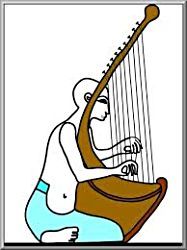 Also, the book excerpt mentions that "in Idut’s Tomb [c. 2320 BCE], two of the five depicted harpers pluck with only the right hand, while the left one holds down the string"

If string-stopping was an established ancient Egyptian harp-playing technique for playing chromatics, in use from at least as early as 2320 BCE, then surely there can be no problem with Curt Sach's hypothesis that it was also being used 2000 years later, by the lyra & kithara players of Classical Greece?

For me, this illustration from ancient Egypt, could well be the "smoking gun" to prove (at least circumstantially) the existence of Curt Sach's hypothesis of the finger-stopping technique to play accidentals on a diatonically strung lyre or harp - & even more significantly, the existence of this finger-stopping technique is evidence of an understanding of chromaticism by the musicians & composers of antiquity, dating back over 4000 years!


The music of the ancients must have been more complex, developed & refined than we could ever have previously imagined...